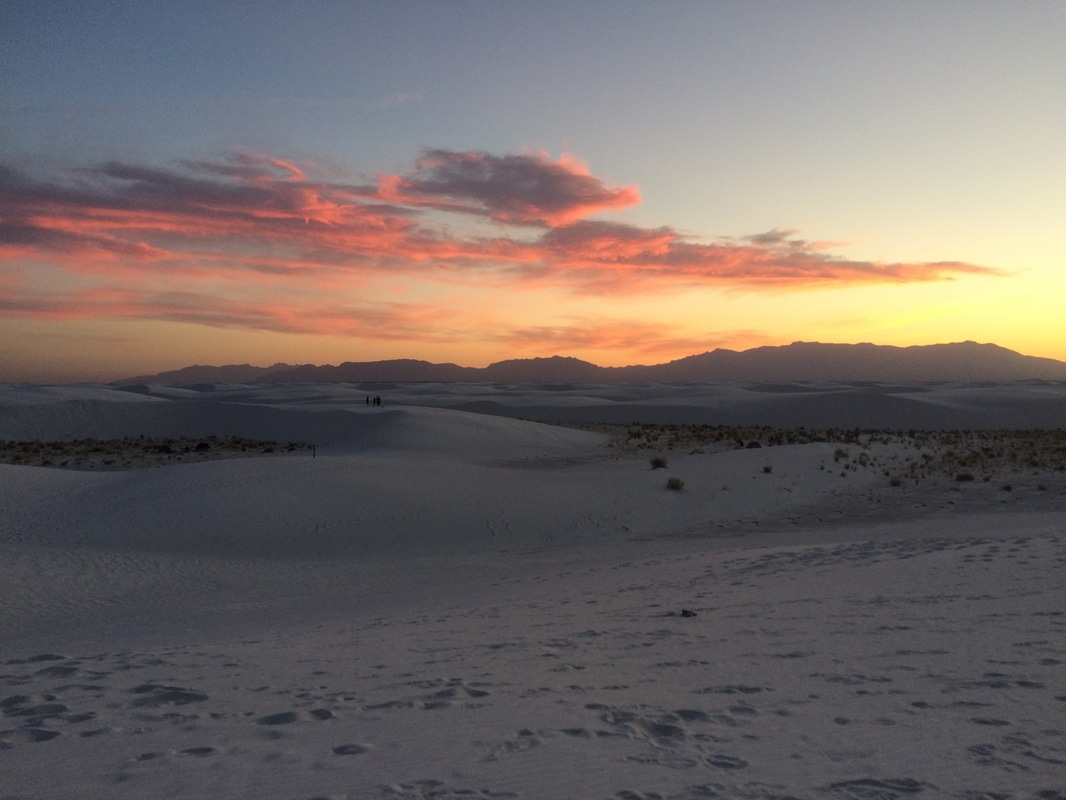 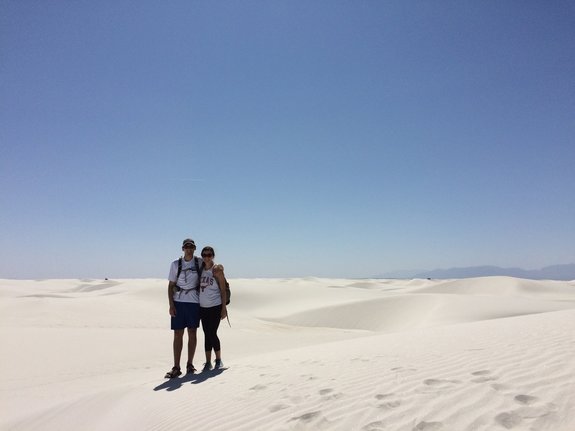 Leigh and I at White Sands National Monument
The Plan
The trip started with a long drive out west towards White Sands National Monument, Guadalupe Mountains National Park, and Carlsbad Caverns National Park over a period of six days.  As a Villanova basketball fan, our first stop was at the Hoppy Monk in El Paso to watch Villanova play in the Big East Championship.  El Paso was much more exciting than I was expecting, although we’ll get back to that later…

Our first stop was supposed to be Lincoln National Forest near White Sands; however, when you type in Lincoln National Forest into Google Maps it takes you to a parking lot that is the headquarters of the park.  Unfortunately, it was at least an hour away from the campsites that were open in March, which were further up north, so we decided to stay in Alamogordo in order to get an early jump start to our day.

White Sands National Monument
We arrived at the visitor’s center at 8:30 a.m. to get in line for an overnight backcountry campsite.  It turns out that there are only ~10 sites, so if you’d like to get a site, you need to get there early.  Then it was time to check out what these white sands were all about!  We started with an introductory “hike” (0.4 miles round trip) on the interdune boardwalk, but the real excitement was coming up.  I’d read about being able to sled down the dunes and, out of all the activities we had in store on this trip, this was the one I was most excited for.

We had borrowed sleds from our hotel and took off on the Alkali Flat Trail ready to slide down anything and everything.  It turns out that you need a relatively steep hill to get moving, and fortunately there were plenty of them.  The Alkali Flat Trail is a beautiful 5 mile trail that takes you around the sand dunes.  So in bare feet with our sleds in hand, we were off, taking pit stops at every steep hill slope around. 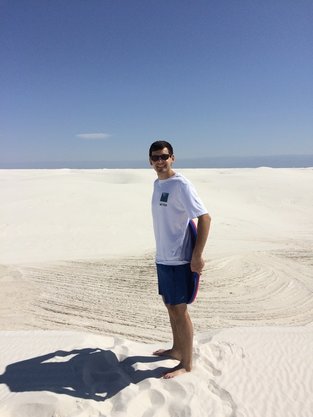 Trying to perfect my form
​There’s definitely a technique to sledding, where you want to keep your weight on the back of the sled.  I also found that using two of the small plastic sleds worked better than one, since the single sled deformed quite substantially under my own weight – Leigh, on the other hand, went flying down no problem.  The first time I picked up some speed on the way down was absolutely thrilling.  Plus, from the top of the dunes, the views are spectacular.  The only mistake that we made was not putting on sunscreen until lunch time, which was a couple hours into the hike.  Needless to say, we were both quite sun burnt.
​
The highlight of White Sands though was by far the overnight “backcountry” camping.  The backcountry campsites were only one mile from the car, so it felt a bit like glorified car camping.  That said, there are only ~10 sites, so you feel as though you have the dunes all to yourselves.  The sunset was absolutely spectacular over the dunes with beautiful pinks and oranges lighting up the sky.  The sunset was followed by the full moon that lit up the ground to the extent that no headlamps were required.  And then to top it all off, the sunrise was similarly spectacular.  It was one of the first sunrises that I recall looking the opposite way at how the sun was lighting up the dunes behind us.  Just spectacular. 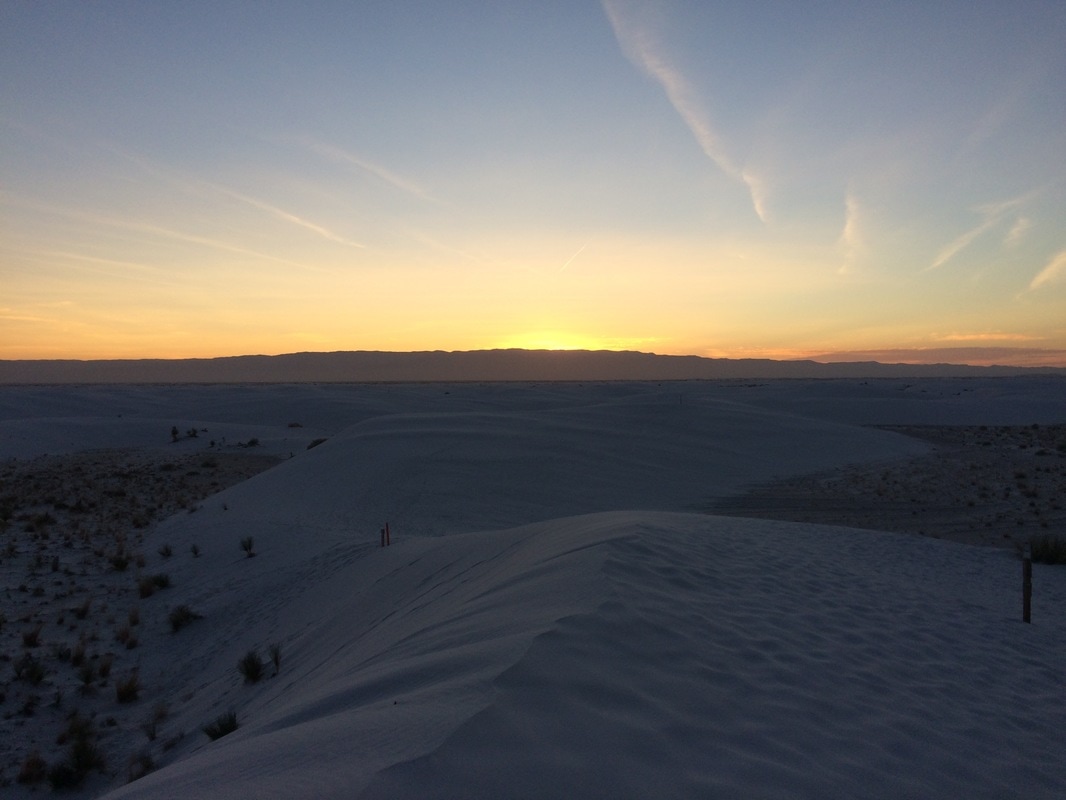 Sunrise over the dunes at White Sands 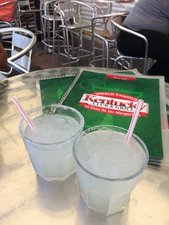 Margaritas at the Kentucky Bar
​El Paso
The one downfall with all the parks out here is that they don’t accept reservations.  This is a problem when you’re trying to camp because it requires you to get to the park around opening in order to get a reservation.  That said, it’s a little difficult to do that when you’re camping at another site hours away.  Instead, we decided to spend a night in El Paso, get a nice hot shower, and it just so happened that the Bachelor finale was on that night as well.  El Paso seemed to have a lot going on.  We decided to take a short trip over the border to the place that supposedly invented the margarita – the Kentucky Bar.  It was a fun trip over the border and a good pit stop… quite tasty margarita as well. 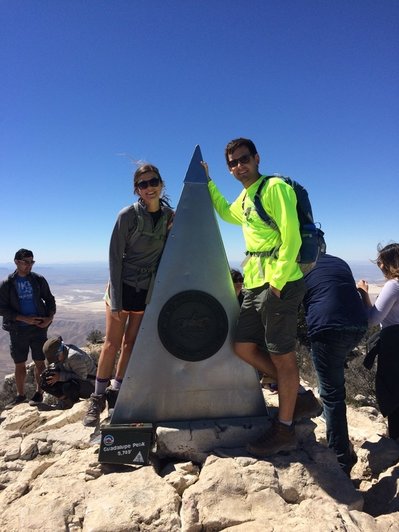 Leigh and I at the top of Guadalupe Peak
​Guadalupe Mountains National Park
If a national park could be your arch nemesis, mine would certainly be Guadalupe Mountains.  Four years ago I went over memorial day weekend to find that all the camp sites were booked and our only option was to sleep in the car or hike up to Guadalupe Peak backcountry camping site.  I was with Elliott and Andrea in my two-door Honda Civic, so sleeping in the car was out of the question.  The only problem was a storm was rolling in.  Needless to say, I refused to drive over an hour away to camp in the closest state park and I refused to sleep in the car, so up the mountain I went.  It turned out that when I reached the top, I saw a beautiful storm in the distance roll in on us; unfortunately, lightning struck the other side of the mountain and we had to evacuate and return to the parking lot.  Now we were allowed to camp in the RV spots…

That said, I was looking forward to camping up at Guadalupe Peak again, so we got there early in the morning, but it turned out the park opened an hour earlier than it said online, so we were an hour late.  That didn’t matter though because all the camp sites at Guadalupe Peak were booked for the next 5 nights… no reservations and yet when you arrived you couldn’t get a reservation for 5 nights.  It was a bit disappointing, but fortunately everything turned out in our favor.  We ended up getting lucky and snagging a car camping spot as another camper was leaving – phew!

We set our tent up to claim our site, and then we were off to the highest point in Texas!  The hike up to Guadalupe Peak starts on a series of switchbacks and rarely flattens out.  We made good time to the top, took our photo with the monument, and then found a nice quiet spot out of the wind for lunch.  The view overlooking the plains of Texas was wonderful. 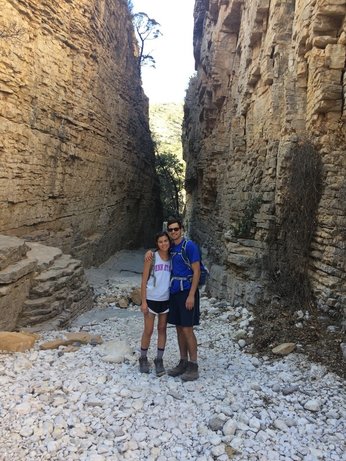 Leigh & I at Devil's Hall
​If you’re looking for a bit more serenity, then the bowl trail is the way to go.  The bowl trail is a rather strenuous hike (~9 miles) with similar elevation gain to Guadalupe Peak.  We got an early start to the trail and were shocked when we didn’t pass a single person for the first 3 hours.  Even later in the afternoon, it felt as though we had the trail all to ourselves.  The trail also gives a much different experience, as you ascend up a narrow canyon to find yourself in a beautiful forest of pine and fir.  For lunch, we took a slight detour to Hunter Peak for lunch, which overlooked the main portion of the park and gave a wonderful view of El Capitan and Guadalupe Peak.  I’d highly recommend this trail over Guadalupe Peak, since it’s a loop and gives you a wonderful diversity of scenery.

We finished the trail around 3 p.m. and figured that we might as well make the most of our time out here, so off to Devil’s Hall we went.  With 10 miles of strenuous hiking we were rather exhausted, but Devil’s Hall was well worth it.  We met a wonderful family who pointed out the fossils that were embedded in the canyon walls.  The trail also takes you through a small slot canyon, which highlights the diversity of trails that you can experience in this park: desert, forest, and canyon all in the same day.  In the end, Guadalupe Mountains was certainly no longer an arch nemesis! 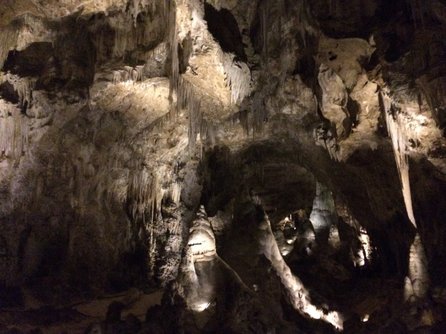 The Big Room is magnificent
Carlsbad Caverns National Park
We woke up early in order to get to Carlsbad Caverns around opening and were able to be some of the first people to hike down into the cave.  The last time I visited the park, I took the elevator down and what a mistake that was!  Leigh and I hiked into the cave through the natural entrance, which was splendid!  The transition from natural light to the darkness of the cave as the temperature dropped truly brought the experience to life as we descended.  We then took our self-guided tour of the Big Room.  The sheer size of the room is remarkable, let alone all of the various formations.  The stalagmites, stalactites, ribbons, lion’s tails, fairy lands, ponds, etc. are lit brilliantly, so kudos to whoever set up the lights throughout these caves.  If you have a little imagination, the caves are a wonderful playground. 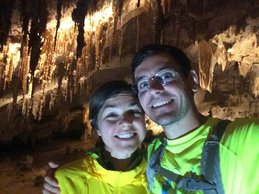 King's Palace tour
We planned timed it quite well such that we finished the cave tour as soon as our guided tour of the King’s Palace was set to begin.  The tour was completely full, which was a bit unfortunate.  Due to my bright yellow shirt and being taller than most of the people there I was selected to bring up the caboose and make sure that no one from our tour got lost.  Unfortunately, that meant not being able to hear our guide too well.  Nonetheless, it was wonderful to see another section of the cave and it gave me plenty of time to figure out a way to take a good selfie – something that is very hard to do given the lighting of the cave… the trick: put your headlamp on the ground and have it shine on your faces.  Perhaps it looks a little eerie, but it sure gets the job done!
Powered by